Over 1.8K views of this Author’s content on Klusster.

Corolla Cross: An SUV that doesn't have much to do with Corolla

Start typing here! You can add more paragraphs, images, videos, and more by clicking the icons in the toolbar!

The famed Toyota Corolla is the world's best-bought three-box car. As a result, the Corolla has also become a calling card for Toyota. The Corolla Cross, Toyota's latest SUV, was designed to fill a gap in the market, and it has been doing well in Thailand and Taiwan since its launch

Toyota Corolla Cross is the newest member of the Corolla family. The difference is that it is the first SUV in the Corolla family (the Wagon, Sedan and Hatchback before that), and it is also the current trend in the global market. It is built on the GA-C platform, the same new global architecture as the Corolla hatchback and C-HR

It sounds like a crossover version of the Corolla, but it's not. It's an SUV that has little to do with the Corolla itself.

The Corolla Cross is based on Toyota's new global platform TNGA-C with Toyota's latest rear-torsional beam suspension, which provides greater stability and comfort. 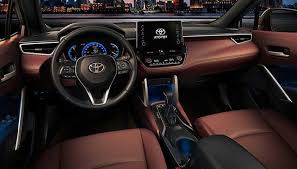 In terms of appearance, the Cross is even less related to the Corolla, inheriting the flaunted Toyota SUVs. The inverted trapezoidal honeycomb mouth is connected to the slender LED headlights, giving people a feeling of very slight sex. The side of the body is shaped by light, shadow and lines, showing the strong muscle feeling incisively and vividly; The front and back two waist lines are sharply surrounded by feature lines; Quadrilateral wheel eyebrow guard plate and threshold anti-rub guard plate show SUV off-road feeling. The thick rear underplate gives the weight of an SUV; The reflector set up on both sides presents the movement posture of a new car.

In terms of interior, the design style of Carolla CROSS is close to the Carolla: suspension control, LCD instrument display, after the air outlet, etc., is the representative of the Japanese practical and simple. Its suitcase space capacity up to 487L, with good storage property.

In terms of power, the new car will have two powertrains, the fuel version and the hybrid version, both of which are composed of a 1.8L naturally inhaled engine. The pure fuel version with CVT continuously variable transmission will produce 140PS horsepower and 177n.m torque. The hybrid version will be powered by the E-CVT, with 121PS of power output and the previously mentioned lightweight body, making it the "king of fuel economy".

With the Corolla Cross, Toyota now has a complete portfolio of SUVs, ranging from Yaris Cross to Highlander, from small SUV to large. Corolla Cross will launch in Thailand, and will expand to other markets, including the US and China, which are most likely. Given Toyota's current momentum in China, the introduction of the model could upend the already competitive SUV market.

Over 1.8K views of this Author’s content on Klusster.