Rescue Dogs Match is a non-profit, 100% volunteer-run organization dedicated to rescuing and protecting all animals in need of care.

Over 44K views of this Author’s content on Klusster.

Dogs of Misfit Island - Their Time is Running Out

We have 4 dogs in very urgent need of foster of forever homes.

Lana will be in rescue 3 years on May 14th 2017. Lana also known as "Lana the Saddest Dog in the World"  came into rescue at 5 months old. Lana was adopted out but her resource guarding became too alarming as there were kids in the home.  At 1 year old she was returned to Rescue Dogs Match and totally shut down in the kennel. She would not eat or go for a walk. We found a short term foster for her and then after 4,000 emails we found one application that we thought would work for Lana. 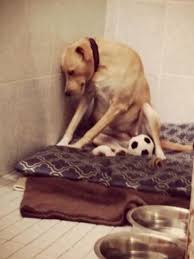 But she was returned again after 6 months.  Lana was then placed in a boarding facility and she was able to handle being kenneled this time. Once she bonded with the girls she was a very happy girl.  We did find a foster home for her but Lana did not work out there either. Lana is very silly but very smart , it seems the street dog in her is just not letting go.

Lana has spent the last 7 months with a trainer and she has made some improvements she still needs a specific environment. The trainer can no longer keep Lana and she needs to be out by May 20th . She cannot go into a kennel and she cannot go back to the boarding facility she was once at as they are busy for the summer.She has made some improvements but there is still work to be done. The best environment for her would be a horse or hobby farm where she can be outside most of the time “helping” her person with the chores around the property. She LOVES to be outside no matter what the weather. For cold winter days a quality winter coat would keep her cozy. Lana loves to be part of whatever is going on but not in “tight” quarters. The best family for her would be a mature couple or person that has the time, patience, determination and commitment to help her become more confident.

York is the next longest.  York's intake to the program was Oct 2015. He was surrendered to a humane society as he lived with an autistic child that would hit him all the time. The Mother was getting worried that York would end up biting her son as York was getting bigger.

York is also sensitive to touch from people. He also has been adopted out once but has been in many fosters.  York is in a boarding facility but as summer approaches the facility wants the pooches out within the next few weeks as the busy season will be coming up fast.  A more rural setting in a calm, experienced home  would be best for York.

Pax has been in rescue since Feb 2016. Pax has also been adopted 2 times and returned. He is actually a very cuddly boy once he trusts the people around him. He does not like people he does not know bending over him or petting him on the head.

Pax will do fine in an experienced home . Maybe a more rural setting but has lived in  cities and has done fine.

Last but not least is King Arthur. Arthur was either used as a hunting dog or was taken away from his mom way to early.  Arthur is a comical boy but has his quirks. He has been in a few foster homes and adopted once. Arthur has been in the program since Dec 2015.

We know there is a home out there for each one of them.  Their time is running out . They deserve a chance at a long and happy life. For full bios please visit www.rescuedogsmatch.com or like our facebook page for the most up to date information. Please share their plea for help

We are looking for a barn that we can use as well. If you know anyone that is renting out a barn with at least 4 stalls please let us know. info@rescuedogsmatch.com or text 519-574-1743 anytime

Over 44K views of this Author’s content on Klusster.