Does River Edge have an all-time favorite son?

Some communities have an immediately identifiable figure associated with it – say, a musician, political figure or writer.

For example, say Abe Lincoln and Springfield, Illinois ought to come to mind. Lucille Ball is still associated with Jamestown, New York these many decades removed from the place, and Mark Twain will always be associated with Hannibal, Missouri.

Locally, to me, the first River Edge name that comes to mind is that of Bill Paultz.

Bill Paultz was a basketball player. He played professionally with the New York Nets of the old American Basketball Association way back when the team was coached by one Lou Carnesecca, a name that might be familiar to some locally – especially if they attended college at St. John’s.

Paultz, himself played his college ball at St. John’s (after attended Cameron). In the pros, he played five years in New York, each in the playoffs. In 1974 he was a key player on the Nets championship team. From the Nets, he was traded to San Antonio. Then came the NBA-ABA merger, and seasons with the Spurs, Houston, Atlanta and Utah.

Most importantly, Paultz was from River Edge.

I became a Nets fan just to hear legendary broadcaster Marty Glickman recall my home town on Nets games (Glickman, best remembered for calling Giants, Jets and Knicks games was the voice of the Nets from 1970-72).

It all started here in town, where Billy, son of 6-foot-5 Bill Paultz Sr., played at but he didn’t play until he was a senior in 1966. There he played for Mickey Corcoran.

He eventually became known as the Whopper – for his size (250 pounds) and for his love of the hamburger by that name.

Back in 2010, the Record did a “Where are They Now” column about Bill Paultz. It spoke of how Paultz, now age 63, was a sales representative in Texas for an LED light company, having retired from the NBA in 1985.

But he’s hardly been forgotten, having become sort of an ABA icon.

And around, here he is still remembered.

So, it’s hats off to Charlie Casserly, former General Manager of the Washington Redskins who came from River Edge. Same to J. Walter Christie (1865-1944) (Christie Avenue) who was a tank pioneer. Also to Harry and Patricia Kislevitz, once of Valley Road, who created Colorforms. Then there’s actress Lee Meredith, who has lived here for a long time. And who can forget our own Freddie Hoffman, who has ridden more than a million miles on his bicycle. We’re proud of you all.

But to me, my personal hometown favorite son will always be “Billy Paultz of River Edge, New Jersey” – even if he does live in Texas.

This piece was first prepared for River Dell Patch - it ran in September, 2011. 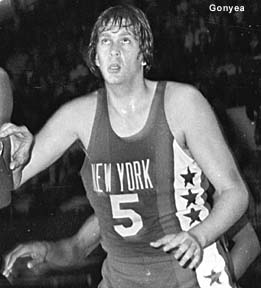