The pace of change is excelerating in Hackensack. Much of its is being welcomed. Some, however, provides pause.

One such in the latter category is the news that the YMCA has sold its building on Main Street. There is talk about the Y perhaps remaining in town, but even if it does, things will be quite different.

The existing building is more than 90 years old - it has been a fixture on Main Street and one of the hubs of the city since 1928 - an emotional anchor as well. It has played an integral role in the community. It is a place that mattered.

Change, one supposes, is inevitable. We can only hope that Hackensack retains its unique charms as it enters a new era.

Here is an interesting article about the history of the Y from The Record in 2019.

Some highlights from that article That caught my attention:

"The building looks remarkably unchanged. The six white columns still stand out front. The wood-paneled lobby now has a flat screen television instead of a piano, but otherwise looks much the same. The artful design stenciled onto the rafters of the gym are still there, as is the original decorative tile around the pool. And in a stained glass window above the lobby, there is still a double triangle symbol. MacAfee speculated the double triangle might have something to do with this Y’s origins serving men and women.

A lot has changed over the years, though. A bowling alley gave way to a fitness center. And the shooting range in a sub-basement below the pool is long gone".

Also below are some images of the Y on Main Street over the years (photo credits YMCA and Downtown Hackensack): 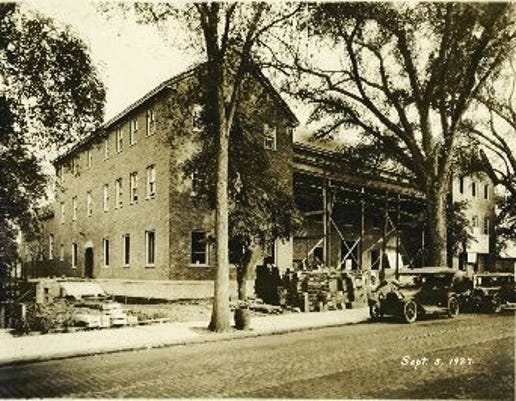