Over 348K views of this Author’s content on Klusster.

Oldsmobiles, Nashes & A Hackensack of the Past

If one is of a certain age, a trip along local streets can actually be a number of simultaneous journeys. Along with the modern day streetscape, “old timers” are often traveling back in time remembering what was once there – be it recently or decades ago.

One such location is along Passaic Street between the train tracks and Park Street.

That location was a longtime car dealership.

For many decades Ratner Olds (remember your good old Oldsmobile Guys?) could that location home. Oldsmobile in its time was part f the General Motors line of cars – along with Chevrolet, Buick, Pontiac and Cadillac.

Originally established as "Olds Motor Vehicle Company" by Ransom E. Olds in 1897, it produced over 35 million vehicles, including at least 14 million built at its Lansing, Michigan factory alone. During its time as a division of General Motors, Oldsmobile slotted into the middle of GM's five (passenger car) divisions (above Chevrolet and Pontiac, but below Buick and Cadillac), and was noted for several groundbreaking technologies and designs.

Oldsmobile's sales peaked at over one million annually from 1983-1986, but by the 1990s the division faced growing competition from premium import brands and sales steadily declined. When it shut down in 2004, Oldsmobile was the oldest surviving American automobile marque, and one of the oldest in the world

We attach a matchbook touting the ’57 Olds that can be found at Ratner Olds, the at 83 First Street (corner of First and Atlantic) near Hackensack Hospital at what had been the Hackensack Arena (a popular roller skating rink), and which later became the home of Hackensack Roofing until fairly recently.

When Ratner departed that First Street location they headed to Passaic Street, a place they called home until the 1990’s.

Before it became an Oldsmobile dealership the site on Passaic Street had been an auto dealership for a different line – that too now long defunct. The attached postcard shows when the location was a Nash dealership.

Nash Motors Company was an American automobile manufacturer based in Kenosha, Wisconsin starting in 1916. It continued to produce cars under a number of different names into the 1950’s until 1957 when it was phased out in favor of the Rambler name (eventually AMC).

Most recently the site has become home of the Hackensack Market, which itself was the last tenant in the old Packard’s building before it was demolished to make way for the Target.

As Hackensack continues to embark on a new chapter, it will be interesting to see what becomes of the location as a new Hackensack evolves next to the one we know today. 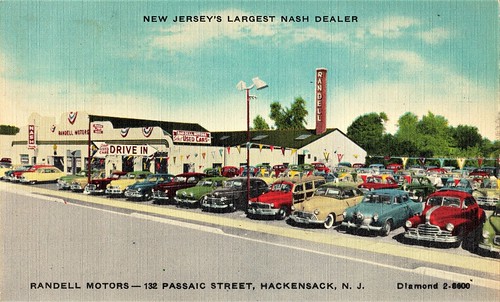 Over 348K views of this Author’s content on Klusster.