Over 349K views of this Author’s content on Klusster.

Not too long ago we profiled a town in Minnesota’s lake district called Hackensack. Named after our Hackensack it is a place connected to the lakes nearby.

Not many are aware these days, but it is not too long ago that there almost came to be a Lake Hackensack right here in our New Jersey Hackensack.

As late as the 1970’s there was a serious effort to build Lake Hackensack from the Hackensack River.

Those who know of such things say that there was once a Lake Hackensack in the mastodon's time, so

Hackensack and Bogota running to River Edge in order to eliminate polluted, tidal

its 180 acres. The shoreline, such as Foschini and Johnson Parks, was to have shoreline landscaping

to encourage the residents to come for the boating, fishing, as well as the shoreline bicycle and

between Hackensack and other points on the lake. There was to be a 5 acre marsh that would be

original colonial village atmosphere, with the area to be linked to Hackensack by the lakefront

path system and boat facilities. There was even talk of an open-air amphitheater to be included.

Of course, the lake was never built. However, some of its proposed elements were, in fact, implemented in subsequent decades the years. Moreover. There are some exciting new plans in place at Historic New Bridge Landing, including an interpretive museum.

Though it may not be called Lake Hackensack, a vision that area and the Hackensack River valley continues. 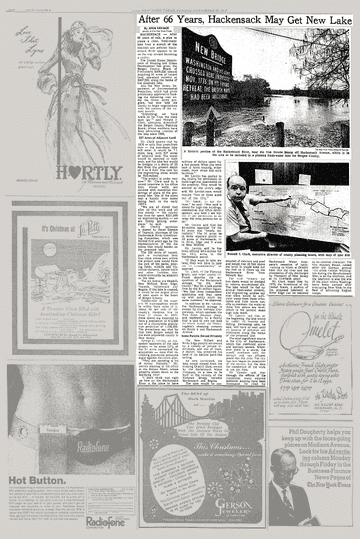 Over 349K views of this Author’s content on Klusster.