Over 337K views of this Author’s content on Klusster.

Remembering Prozy’s and Generations of the Prosnitz Family

During Hackensack’s last golden era, the area was a hub for shopping, eating and entertainment.

Stores such as Sears, Arnold Constable, Franklin Simon, and Packard’s are most remembered. But there were many others – and most were family run businesses – places like Lowit’s Tfank and Kreiger’s

Another such business was the longstanding Prozy’s Army and Navy on Main Street.

In eras that had more than a few such stores, Prozy’s was the flagship in that genre. The New York Times in a 2005 article when it closed described Prozy’s as “a classic multigenerational saga, retail style”.

It was in the wake of World War I that Jules Prosnitz, born in NYC in 1888 and a former salesman for the Knickerbocker Shops there, was asked to help start an Army-Navy store. But as his partner lacked business skills the business almost failed until creditors (fellow members of the Odd Fellows Society) asked Jules to take over the business. He was able to stabilize that business and make it last another 80 years.

Milton was 15 when he came to work for his father in the early 1930's. After high school, he was attracted by the low tuition to enroll at the University of Alabama but after a year, short of money, returned to the store. But by World War II, Prozy's was prospering, and Milton owned a satellite Prozy’s in Irvington.

He saw combat in the field artillery during the Battle of the Bulge, which left his feet severely frozen and hospitalized him for three months. After, he resumed life at the store. Business continued to flourish; at one time there were five full-scale Prozy stores statewide.

The original store was 12 feet wide, but in the 1960's after Jules's death, Milton began buying stores on either side and was able to expand the frontage to 100 feet.

Ted Prosnitz entered the family business at age 10, sweeping floors. His brother, Eric, is a doctor. After earning a master's degree, Ted worked as a hospital administrator for two years. But in 1978, at about the time his mother died, he returned to the store.

As that 2005 N.Y. Times article explains, Army-Navy stores started to surface based on a surplus of war clothing after World War I. The more successful ones like Prozy’s, it said, evolved into places where people could also buy work clothes, jeans, camping equipment and western boots at reasonable prices. In the process, they even gained a certain cachet, as well as periodic spikes in sales, as items like Navy pea coats, Eisenhower jackets, cargo pants, Carhartt jackets and work boots, to name a few, became fashion statements. (It's probably no coincidence that when Gap Incorporated wanted to open stores that featured affordable clothing, it named the franchise Old Navy opined the Times article.)

That article and a couple of more to be found here: http://www.hackensacknow.org/index.php?topic=675.0

It gives an idea just what places like Prozy’s meant to their customers and the community.

It’s over 17 years since the place at 121 Main Street closed for good. And while some exciting new places are in store for the block and the area, Prozy’s remains in the hearts and minds of those who once lived and shopped in Hackensack. 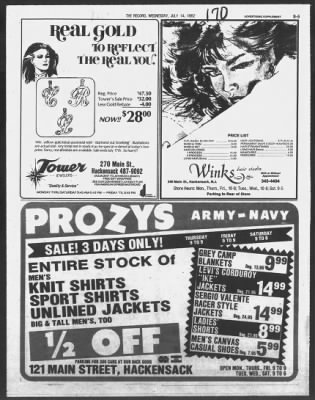 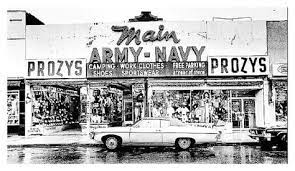 Over 337K views of this Author’s content on Klusster.