The Newest Chapter of Comings and Going of Supermarkets

I had only recently started to get past the closings of Harold’s and Fairway when greeted by the news that Stop & Shop on Route 17 was closing its doors and would not be reopening. It had been my understanding that the place was going quiet for a time so that the site could be rebuilt and modernized for a state of the art Stop and Shop. However, that plan of 2019 at some point changed, and now the site that was once also home to Kmart (a great story about life there Kmart for a future posting) is pretty much abandoned.

Given how much the real state is worth in the neighborhood it is interesting to see how long it takes to demolish the old buildings and what will follow.

I liked the Stop & Shop. It was a no frills old school kind of place that offered convenience, especially if I was home from the north. I could step in and out and avoid still the Paramus traffic on 17 and 4.

But as one place leaves two others enter – the Amazon at the site Fairway and a place called Mom’s Organic Grocery, a Maryland concern with a presence in South Jersey, the city and Westchester. It now makes its entry into North Jersey with a market at --- Route 17.

We wish them well.

It got us to thinking of food shopping going back a few years back – especially at the old Bergen Mall.

Many remember the recent Shop Rite before it moved to its present site – there next to the Ponderosa Steak House. But before that at the early days of the Mall that side east of Forest Avenue was known as the "Food Center".

It was anchored by a Food Fair and a Penn Fruit store. The Food Fair was housed in a modern looking square structure that later became an ice skating rink. Today it is the where the REI occupies part of the building.

The Penn Fruit was in a larger rainbow shaped building similar to the Kmart on 17). It did not last that long as it was eventually replaced by Shop Rite. That structure came down and was replaced by what now houses a Red Robin and some empty store fronts (previously Kirkland’s and recently a Halloween store) part of a shopping experience now called Bergen Town Center.

If memory serves correct, Korvette’s across Route 4 once had a supermarket as well. Today it is home to Kohl’s, Party City, et. al.

Do you have other supermarket recollections of the area ? 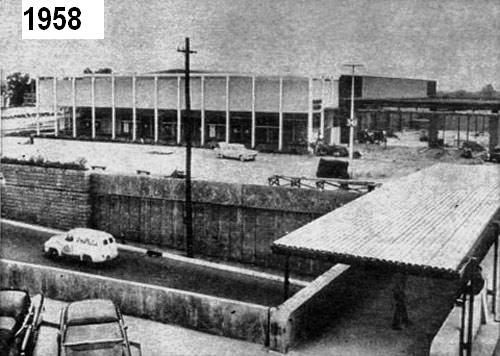