From our team of Pedorthists and Athletic Therapists we bring Burlington relevant information on ... more

From our team of Pedorthists and Athletic Therapists we bring Burlington relevant information on orthotics, compression socks, orthopedic shoes and bracing.

Over 16K connections made by this author in Klusster. Get started today and reach more people through the power of together!
Join Klusster

A bump that forms in the heel in women wearing dress shoes & hockey players. Extremely painful & causes discomfort while walking.

Haglund’s is a fancy name for the bump at the back of the heel that forms in some people. It is also called pump bump because it is quite common in women who wear dress shoes.

How Does it Occur?

The action of the shoe rubbing up and down on the back of the heel could be a contributing factor. There is a hereditary factor that may contribute to Haglund’s and people with high arches may be predisposed. When you have a high arch it causes the uppermost portion of the back of the heel bone to rub against the Achilles tendon, which in combination with certain styles of footwear can lead to the formation of the bony protrusion seen in Haglund’s deformity. Once this protrusion has formed, the bursa in the area tends to become inflamed leading to painful bursitis. 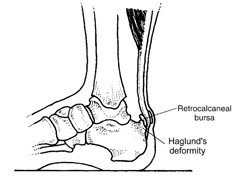 The majority of children I have seen with a Haglund’s deformity have been competitive hockey players playing 5-6 times per week. This is thought to be due to how rigid hockey skates are and at times they have pressure points at the back of the heel where the Haglund’s deformity is formed. Once the deformity has formed, it is common for the continuous irritation between the bony growth and back of the skate to lead to rbursitis. This is typically when children begin having symptoms.

A Pedorthic assessment can determine if custom foot orthotics would help reduce the discomfort or if accommodation pads can be implemented in footwear to reduce the irritation between the deformity and the shoe. Heel lifts can be added to custom foot orthotics or placed separately in footwear to slightly raise the heel to help relieve some tension in a tight Achilles tendon. This should be accompanied with a stretching program for the calf muscles to help lengthen the tendon. 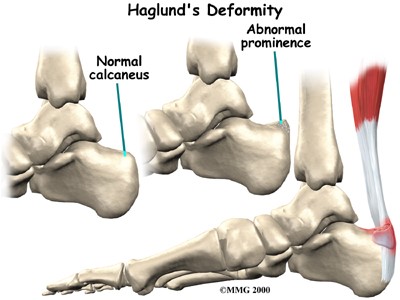 Two Locations to serve you

We are always interested in hearing from you
Over 16K connections made by this author in Klusster. Get started today and reach more people through the power of together!
Join Klusster