Arction Ltd - We provide the most advanced charting solutions in the industry. Fastest charting libraries, with the highest-performance available for .NET, Windows Forms and Web.

At Arction, we develop charting controls or libraries for different application and web development programs. For .NET charts, you can use our charting library namely LightningChart. Charts are integral parts of different kinds of web or mobile applications. Using charts will make it easier to represent complex data in a informatic manner. Our charting library for .NET has been used for developing different types of applications. From trading to education, there are many applications that need to incorporate the charts.

We have noted that there is an increasing demand for seamless charting controls for trading applications. Traders need to see current trends and past records of currencies and stocks. Since trading is a dynamic field, it collects a huge amount of data on every day. Traders make important decisions based on the collected data. For interpreting data in a seamless way, traders need to check charts and graphs. With interactive data representation through charts and graphs, it turns easier for the users to interpret data easily. 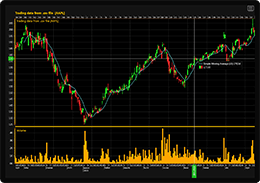 TradingChart in LightningChart .NET V.10.0 comes with built-in drawing tools. As a result, it can save a lot of time for the developers. There are many drawing tools. Those tools have been listed in the following section.

Drawing a chart for representing the complex trading data will become easier with the built-in drawing tool from LightningChart for its TradingChart.

TradingChart in LightningChart comes with many other built-in features. For example, developers can use the color themes to make the graphs attention-grabbing. Choice of colors is important to represent crucial data on the charts. Sometimes, color represents certain type of data in a chart. Hence, built-in color theme will make the charting integration easier for developers. TradingChart also comes with data cursors for tracking individual data values. Other features include automatic removal of non-trading time period, technical indicators, etc. At Arction, we have made LightningChart V.10.0 more user-friendly and stable in performance for the users.