Over 47K views of the content in this Blog.

A tiny cottage is often the European term of choice for a tiny home or tiny house. Perhaps “cottage” sounds more quaint and upmarket than home or house.

Here in Canada, the words “going to the cottage” or “we share a family cottage” roll off the tongue with much more satisfaction than “going to a tiny house”. Those mystical places amongst the lakes and trees a couple of hours North of Toronto in Ontario, near lake-fronts or on the coast in other provinces share the name “cottage country”.

Cottages are not all tiny. Many in the more expensive and exclusive parts of cottage country are bigger and more luxurious than the average suburban family house.

3 common fears about moving to a tiny cottage

These are the three biggest fears I faced when forced to move into a tiny cottage. It was called a cottage and it seemed tiny but as it was a bit over the 500 sq.ft. upper limit for the category, it was really a small home.

In this post, I will tell you the reasons for my move, how I overcame those three fears and how you could too. It’s all in the mind and our motivation for the transition.

Why I moved into a tiny cottage

In November 2002, my partner Sue and I were living on our 1000 acre farm in Zimbabwe when we became casualties of the brutal and illegal campaign by the Zimbabwe government to force all commercial farmers off our farms. If you are interested, you can read more of the story here.

Because I refused to give in to intimidation and move off our farm, the police arrested me and put me in a police cell for 3 days and nights. After appearing in a kangaroo court, I was released on bail on the condition I did not return to my farm.

Sue had 2 days to move all our personal possessions, farm equipment that had not been stolen, 6 cats, 6 dogs, 12 horses and our cattle herd off the farm. As we had done for many of them, our former neighbours and other farmers came with their trucks and moved everything to my mother’s tiny cottage on my brother’s 50-acre property. As it was not considered a commercial farm, it seemed safe from seizure.

Where will I put all my stuff?

We were able to quickly erect some shelters for the horses, the cattle had to be sent to slaughter.

The real problem for us was what to do with all the furniture, carpets, ornaments, clothes and other personal stuff that had filled a large – around 4000 sq.ft. farmhouse. Only a fraction of it would fit into the tiny 2 bedroom cottage with a floor area not much bigger than the lounge in our farmhouse. 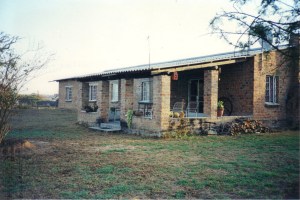 Our House on Nyazwitza Farm

Luckily for us, even though the rainy season had started, the weather forecast promised a week of dry weather.

The cottage had a fenced garden and a bigger lawn than most houses in the subdivisions that are blossoming all over South West Ontario. It was inside the electrified security fence that was an essential security measure on farms in Zimbabwe. Our belongings were safe from theft.

We started with the essentials, our bed, a smaller one for the second bedroom, stove, fridge, washer (driers were an unnecessary luxury in that climate) enough clothes and household linen to fill the few cupboards in the cottage.

A few pictures and ornaments, a basic selection of cutlery and crockery, beds for cats and small dogs in the house. Large dog’s beds under the roof of the carport outside. Passports, other important documents and a few good books were safely tucked away.

Everything else – and there was a huge pile left over was stacked on the lawn.

How will I manage without it?

We managed very well. It is amazing how liberating it is to look at a huge pile of possessions on a lawn and realise that you don’t need any of it. What we had squeezed into the tiny cottage was enough for comfortable living.

Gratitude that unlike many of our fellow farmers and thousands of former farm workers, we were alive, unhurt, had a roof over our heads, stuff to sell to provide cash for living expenses and food to eat.

At the time, inflation in Zimbabwe was in the millions of percent. Prices increased every day, sometimes many times in a day, often doubling overnight. There were shortages of food, petrol, diesel. Power failures were almost a daily occurrence. We sold things for many more Zimbabwe dollars than we had paid for them, but at a fraction of their true value in hard currency.

Crime and intimidation by the police and government-sponsored thugs increased.

But we were comfortable, we quickly discovered that we could live well without most of the things we had been worried about losing.

Will I get claustrophobia in a tiny cottage?

We were lucky, the climate in Southern Africa is much warmer than most of North America. Being in the Southern Hemisphere, November is almost midsummer and one of the hottest months. Being inside a good security fence, we could keep our doors and windows open. We had a small veranda and chairs under trees to sit outside.

There was a large lawn and flower garden between our cottage and my brother’s house where we could walk, a swimming pool we could use. We found homes for most of our horses but kept four to ride. We were able to spend a lot of time outside.

The climate allowed large windows, so even on rainy days with dark skies, we did not feel as if we were in a prison cell.

We found that even though we no longer had a farm to run, we kept ourselves busy winding up the business accounts, selling stuff, discussing what we were going to do, where we were going to move to. Keeping busy stopped us becoming depressed. We did have our bad days and it would have been easy to look at the confining walls of the tiny cottage we were living in and be miserable. Mostly we kept positive and enjoyed the unstructured life we had then, no employees, no payroll to meet, no creditors to pay, not searching for scarce inputs for the farm.

You don’t have to feel imprisoned when living in a tiny home of any type.

It’s all about attitude, gratitude and choice.

We were forced to live in a tiny cottage through traumatic circumstances that I hope you never have to face. But our experience showed us that it is possible to make the transition from a large house filled with stuff to a tiny home quite easily.

It can be liberating and result in a comfortable life, with fewer worries than in a conventional sized home.

Read more about tiny house living in this book- Tiny House Living.  For a wider selection of books, plans and other products to make living in a tiny cottage more comfortable, visit our store.

Are you contemplating moving to a smaller home? Visit our website and subscribe to our newsletter for more information, tips and ideas on tiny home living.