What is Solar Power Plant ?

Photovoltaic's converts light into electric current using the photoelectric effect. The solar system consists of an arrangement of several components including solar panel to absorb and convert sunlight into electricity, solar inverter to change the electricity from DC to AC as well as monitoring the system, solar battery and other solar accessories to set up a working system

"If you don't have electricity connection or a reliable grid and you want to store electricity, than off grid solar power plant is system recommend for you." Off-grid solar systems or battery backed Solar power systems are different from the on-grid / Grid-tied solar systems in the sense that they are set up independently from the state grid. These systems have an additional battery backup system which is charged by the electricity generated solar panel installation or in the other words you can say Solar energy. The Batteries in this type of solar systems are charged when the generated power is more than the power being consumed. While on paper, battery backed systems sound like a great idea, these systems are generally more costly than on-grid systems and have lower efficiency. They require more maintenance then the on-grid solar system. The battery needs to be replaced every five years or so but on the positive side, you can use solar energy even in the hours where there is no generation. Off-grid systems are perfect for your rooftop solar plants if you have a very erratic power supply or do not get any power at all or their need of extra charges to lay electricity lines where the grid is far from the consumer premises.

"If you have a reliable grid but your electricity bills are high, then on grid solar power plant is recommend for you." Grid connected systems or on-grid systems or grid tied solar systems , are solar systems that are connected to the building mains directly. These systems give priority to the solar power generated from your solar panel system and only if the power generated from your solar power plant is less than that required by you, then only the grid power will be used. As explained above, inverters are used to convert the DC electricity produced from your solar panel installation to AC electricity. In case you opt for a grid connected system or grid-tied solar system, you are eligible for Net Metering, a process where all the excess power that you produced is fed back to the grid and you receive a credit for the same. In case you generate more than you consume in one complete year, the DISCOM also pays you for the excess units generated. In many states, Net Metering has been made mandatory to avail subsidy for solar.

What does a solar inverter do? 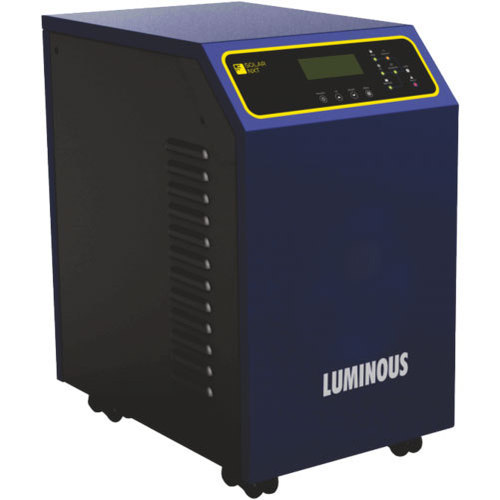 A Solar Inverter or PV Inverter is a device that converts the variable direct current (DC) output from the solar panels into alternating current (AC) which is used by domestic and commercial appliances or can be fed into a commercial electrical grid. It is one of the most critical balance of system(BOS)-components of the solar power system as it converts power from the sun into more useful energy and is often referred to as the brain of a solar system. Solar inverters are a crucial part of a solar system since power from sun cannot be directly used to run electrical appliances. Starting out as just boxes converting DC into AC, today, solar inverters have evolved to become much more smart and intelligent units, performing other functions such as data monitoring, advanced utility controls etc. Solar power inverters have special functions adapted for use with photovoltaic arrays, including maximum power point tracking and anti-islanding protection.

Solar Inverters in India are mostly imported through a few domestic and international manufacturers have set up manufacturing operations in India.

String inverters can be used for both rooftop and utility solar, while central inverter is used exclusively for utility-scale applications. Micro inverters are the best option for residential solar but they are not yet very popular in India.

The inverters are solely responsible for more operational functions than any other PV system component. These duties have continued to grow as systems.

The basic function of an inverter is to convert the direct current (DC) power that solar panels create to alternating current (AC) power that is usable in homes and businesses or fed directly into the grid in front-of-the-meter projects (utility-scale solar arrays).

Inverters are responsible for continuously tracking the solar array’s voltage to identify the maximum power at which the modules can operate, according to PVEL. If shading occurs from environmental factors or if modules are degraded, the inverter can accidentally identify the wrong peak in the string, thus reducing the overall energy production of the system.

3. Interface with the grid

distributed resources turning all the way off and halting power production. Read all about smart inverters here.

How do you set up a solar power plant?

The following are the important key factors to be considered before setting up a solar captive power plant:

Load Supported. They are usually the largest single influence on the size and cost of a PV system. ...

5. Other factors to be considered. 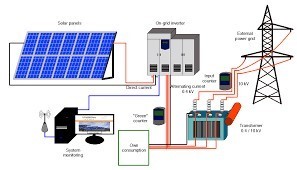 Among all the benefits of solar panels, the most important thing is that solar energy is a truly renewable energy source.

Among all the benefits of solar panels, the most important thing is that solar energy is a truly renewable energy source. It can be harnessed in all areas of the world and is available every day. We cannot run out of solar energy, unlike some of the other sources of energy. Solar energy will be accessible as long as we have the sun, therefore sunlight will be available to us for at least 5 billion years when according to scientists the sun is going to die.

space. Solar energy can also be integrated into the materials used for buildings. Not long ago Sharp introduced transparent solar energy windows.

Solar energy systems generally don’t require a lot of maintenance. You only need to keep them relatively clean, so cleaning them a couple of times per year will do the job. If in doubt, you can always rely on specialised cleaning companies, which offer this service from around £25-£35.

Most reliable solar panel manufacturers offer 20-25 years warranty. Also, as there are no moving parts, there is no wear and tear. The inverter is usually the only part that needs to be changed after 5-10 years because it is continuously working to convert solar energy into electricity and heat (solar PV vs. solar thermal). Apart from the inverter, the cables also need maintenance to ensure your solar power system runs at maximum efficiency. So, after covering the initial cost of the solar system, you can expect very little spending on maintenance and repair work.

Technology in the solar power industry is constantly advancing and improvements will intensify in the future. Innovations in quantum physics and nanotechnology can potentially increase the effectiveness of solar panels and double, or even triple, the electrical input of the solar power systems.

The Future of Solar Cells-

To outpace current solar cells, a new design would need to be able to capture more light, transform light energy to electricity more efficiently, and/or be less expensive to build than current designs. Energy producers and consumers are more likely to adopt solar power if the energy it produces is equally or less expensive than other, often non-renewable, forms of electricity, so any improvement to current solar cell designs must bring down overall costs to become widely used.

The first option, adding hardware that allows the solar cells to capture more light, does not actually require bandon current solar cell designs. Electronics can be installed with the solar cell that let the cell track the sun as it moves through the daytime sky. If the solar cell is always pointing at the sun, it will be hit by many more photons than if it was only pointing towards the sun around midday. Currently, designing electronics that can track the position of the sun

accurately and consistently for several decades at a reasonable cost is an ongoing challenge, but innovation on this front continues. An alternative to making the solar cell itself move is to use mirrors to focus light on a smaller, and therefore cheaper solar cell.

Another route to improving the performance of solar cells is to target their efficiency so they are better at converting energy in sunlight to electricity. Solar cells with more than one layer of light-capturing material can capture more photons than solar cells with only a single layer. Recently, lab-tested solar cells with four layers can capture 46% of the incoming light energy that hit them. These cells are still mostly too expensive and difficult to make for commercial

use, but ongoing research may one day make implementing these super-efficient cells possible.

The alternative to improving the efficiency of solar cells is simply decreasing their cost. Even though processing silicon has become cheaper over the past few decades, it still contributes significantly to the cost of solar cell installation. By using thinner solar cells, material costs decrease. These “thin-film solar cells” use a layer of material to harvest light energy that is only 2 to 8 micrometers thick, only about 1% of what is used to make a traditional solar cell. Much like cells with multiple layers, thin-film solar cells are a bit tricky to manufacture, which limits their application, but research is ongoing.

In the immediate future, silicon solar cells are likely to continue to decrease in cost and be installed in large numbers. In the United States, these cost decreases are anticipated to increase the solar power produced by at least 700% by 2050. Meanwhile, research on alternative designs for more efficient and less expensive solar cells will continue. Years from now, we are likely to see alternatives to silicon appearing on our solar farms and rooftops, helping to provide clean and renewable sources of energy. These improvements have and will continue to be made possible by increasing bulk manufacturing of solar cells and new technologies that make the cells cheaper and more efficient.