Over 54K views of the content in this Blog.

Our History, Our Journey, Our Award Winning Business

From its roots as a work at home business to a national franchise chain, how WP Creations became what it is today.

Sometimes the best things in life come at unexpected times and from unexpected circumstances. When Debbie Cornelius, our founder, decided she wanted to create a keepsake to capture a memory of her children for her husband, she did just that. Created something. Little did she know at the time, she had just planted a seed.

Wanting to capture her child's hand and footprints, Debbie figured out a way to create impressions of them in bronze plaques. 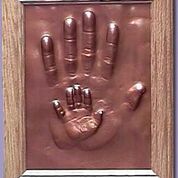 When her keepsake caught on people would drive hours to see her to have one made for themselves. This is how her business Pat-A-Cakes began. It quickly caught on as the perfect work at home opportunity for moms and in 2001, with a name change to Wee Piggies and Paws, it became an official National Franchise work-at-home opportunity. As popularity amongst moms increased, so did franchise owner expansion. 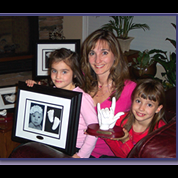 Debbie Cornelius, Founder, And Her Girls

Over the years, product development continued. Creating new ideas, new products, through trial and error, growth and learning, some products stayed and some products went. 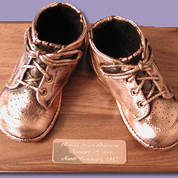 Wee Piggies and Paws became associated with beautiful 3D lifecasts, whether statues or as a shadowbox and up to this day they are one of our most cherished keepsakes.

Debbie and her company gained media attention, awards, widespread recognition. In no time, she needed a head office, partners and an entire support team!

As life happens, people evolve. There came a time when Debbie decided it was the best thing for her and her family to move on from Wee Piggies. Her business was her baby. Her baby was growing up and it was time for her to let it go. Knowing she was leaving it in the best possible hands, Debbie retired.

I, Jamie Berube, current President and CEO took over the business upon Debbie's retirement.

After my time as a successful franchisee I joined head office early on during that time and continued on in this capacity until completely taking over as sole Franchisor. I have a knack for business, a background in training and sales and a passion and drive for this business. I was able to take the Wee Piggies foundation and mold it (pun intended!) into a well-oiled machine. With over 40 locations currently, I have introduced a newer system equipped with even more franchisee and team support, new hands-on training and an on-going coach-team support system. The name has since changed to WP Creations. Despite the name change, increase in brand awareness and brand consistency, I have still managed to keep the tried and true traditions of what the company was founded on, meanwhile keeping up with the ever-changing world of marketing, technology, and social media. The morale of the company has been strengthened due to my ability to create a supportive work environment despite everyone being distant geographically. Franchisees feel heard, feel validated and feel supported.

Jamie Berube at the Mompreneur Conference 2019

On April 8, 2019, The Canadian Franchise Association awarded WP Creations with two awards at their Annual Conference and Awards Gala. One being the Franchisee Choice Designation Award and the other was the Bronze Awards of Excellence.

I take great pride in these awards, not just on behalf of myself, but on behalf of my entire team of franchisees. Because of the hard work, dedication to the company, and passion as entrepreneurs, our franchisees and their level of excellence is what has provided our community with service and product that we can be proud of. I am humbled by these awards and incredibly proud to look back on my journey with this company. Being able to see where it started, and where we are today, is powerful.

I am so excited to see what the next many years have in store!

How long have you known about our company?