A Journey into Hidden America

It's an event that has been taking place for centuries, but it might be put to its greatest test ever.

Folks in Delaware have been engaged in a wonderful exercise of civic unity and reconciliation since colonial times.

It is called Return Day and it is slated to occurr again this Thursday - November 10.

Return Day has its roots in the deep rifts that divided Sussex County during the American Revolution, when many residents of southern Delaware favored independence from Great Britain; but others wanted to remain loyal to the king.

During an election held in October 1776, a gang of several dozen Tories physically abused Patriot voters in an attempt to elect Loyalist representatives to the Delaware General Assembly.

Eleven years later, the American Revolution was over; but the bitterness remained.

Back then the public would congregate in Georgetown two days after the election to hear the results (because it would take that long to deliver the results to the courthouse by horseback from the state capital in Dover, Delaware). The winners of that year's elections parade in horse-drawn carriages around The Circle. Together with the losers and the chairs of the county's political parties, they ceremonially "bury the hatchet" in a tub of sand.

So to today, every two years, Georgetown hosts Return Day. It involves a half-day-long parade and festival two days after Election Day.

During the 19th century, Return Day developed into an elaborate celebration that historian J. Thomas Scharf described as “high carnival,” when the Georgetown streets were lined with vendors selling southern Delaware treats, such as fish, oysters, chicken, opossum, rabbit and other goodies.

The November election was typically held a few days after Halloween, and many Return Day revelers were dressed in distinctive attire.

These days, the afternoon of Return Day is a holiday for county and state workers in Sussex County. The day's events are marked by a traditional ox feast, this symbolic act of acceptance and reconciliation, followed by the beginning of the next round of campaigns.

As has been the case for centuries, the event is again scheduled this year. The notion of reconciliation is put on the agenda. But like so much this year this event may not turn out as usual or as contemplated. These are different times.

From here it seems like one of those "Make noise" or "Cheer" signs when the home team is behind and just does not have the stomach to do so. The idea might be a good one, but not everyone is town is in a place that allows for such merriment. 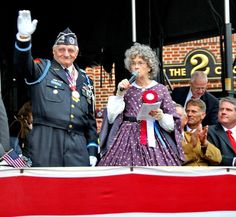