Over 54K views of the content in this Blog.

For a time, several NY Yankees lived in the borough

The fervor of Cubs and Indians fans during this year's World Series has triggered a number of memories at the old Yankee Stadium.

Most of these mental images from the past were set in the Stadium – the old original one before it was “renovated” in 1976 (It was never quite the same after that). Others came via the TV and radio (Mel Allen, Phil Rizzuto, Red Barber and later Frank Messer & Bill White).

But some occurred right here in River Edge.

Locally, baseball has longtime been a springtime focus in town. Little League has nurtured and developed generations of ballplayers. Babe Ruth and have been prominent here over the years as well.

But our connection to the game goes deeper. For many years, River Edge was, in fact, a home for the Yankees, at least some of them.

The time was the 1960’s. The world, and especially the baseball world was a far different one. It was an era before free agency. Players remained with a team until traded or cut. They were also paid much less than do today’s multi-million dollar contracts with no-trade provisions.

These days Yankee players are apt to live in places such as Franklin Lakes or Alpine. But back then it was River Edge that was an address of choice for New York Yankee players.

Our town was just a short drive down Route 4 and over the G.W. Bridge into the Bronx. In those days, the bridge did not back up as frequently as it does today (Then it was usually only for morning rush hour). It was a predictably easy trip.

Moreover, River Edge offered an affordable community, and a family town, reminding many players of their All-American neighborhoods in other parts of the country.

Among those who made River Edge their home the most prominent was a recognizable name – Mickey Mantle.

Growing up in town, one heard that Mantle lived on Beech Drive, but many kids of that era were too in awe to venture a trip to that special place to see for themselve

A recent entry on an online bulletin board refers to #7’s first residence on Manning Avenue.

Also on the internet, one can find a Life magazine picture which is described as having been taken in Mickey Mantle’s River Edge, backyard. There’s not much of the Mick in the picture (other than his muscular arms and hands holding a bat), nor is there much of River Edge. But it is a fleeting connection to our town.

Mantle was not the only Yankee to call River Edge home.

Joe Pepitone lived on a split level home on June Court, just off Kinderkamack, during his time with the Yankees, before moving on to places such as Chicago and Houston.

Stories of interactions between Yankee players and star struck town kids live on decades after they occurred.

One is of a youthful Yankee fan who mustered up the courage to trek the front door of the Valley Road home of Yankee shortstop (and later broadcaster) Tony Kubek seeking an autograph of his hero. When he rang the doorbell and Mr. Kubek appeared, the youth was panicked upon his discovery that try as he may to ask for the autograph, so awestruck was he that no words came forth from his mouth. A gracious Kubek displayed a compassionate side, obliged, and signed the bat that had been thrust into his midsection (The Yankee shortstop was considerable taller than the 10 year old), and was thanked by a fleeing child, bat and autograph in hand.

A similar tale was relayed about an interaction between young fan and Yankee at the Eastbrook Drive home of the late Clete Boyer, a Yankee third base mainstay during the championship years of the 1960’s. Again a connection occurred, but it was one with few, if any, words uttered.

This interaction might have lasted all of 30 seconds, but it had a profound impact on the youth who then proceeded to mimic Boyer’s batting stance for a year. In hindsight, such admiration might have been misguided. After all, Boyer was a solid fielding third baseman but never did hit for much. Similarly, the little leaguer’s batting average started to slide once Boyer’s batting stance was embraced. It would have been better to stay with Bobby Richardson’s or Mickey Mantle’s swing instead.

Years later, most of the “Yankee” homes are still there. But the Yankees themselves, past and present, are gone. Some, like Boyer and Mantle, have died. Others have continued their lives elsewhere. Modern day Yankee players pass us on Route 4 on the way to other places they call home. Different time – different sensibility.

I’d like to think it’s their loss – for to those who grew up here among the Yankees and still live here, we still think it’s a good place to live – whether as an adult who has tired of the business of professional sports or as one tapping into kid Yankee fan inside. 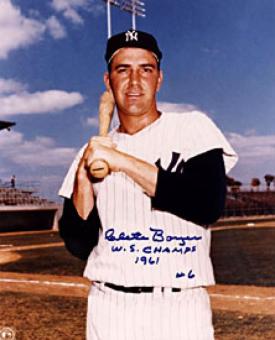