Over 21K views of the content in this Blog.

In an earlier posting we wrote of Oradell's favorite sons - and especially of Wally Schirra.

Walter Marty Schirra, Jr. (March 12, 1923 – May 3, 2007) was one of the original Mercury 7 astronauts chosen for Project Mercury, America's first effort to put humans in space. Schirra was the fifth American and the ninth human to ride a rocket into space. He was the first person to go into space three times.

Here is our prior posting on Schirra's local roots.

Since that time we have come across some other cool materials and want to share them with you here.

In October, 1962 Wally Schirra returned to turn as a hero. A Wally SChirra Day was staged.

I was a nine year old who waited down the road in River Edge to try to get a glimpse at the returning hero. After waiting for a couple of hours, all I get was a view of a motorcade turning from Main Street onto Kinderkamack - and at a rapid speed at that.

I got to see some police cars and a Public Service bus in the parade, and I would like to think that I saw Mr. Schirra, but honestly I so not know. It, nonetheless, was quite a day as I felt connected to history.

Not until recently did I ever see what actually occurred up the line in Oradell. Schirra was the guest of honor, but also garnering a lot of attention was the Mercury capsule that also came to town. 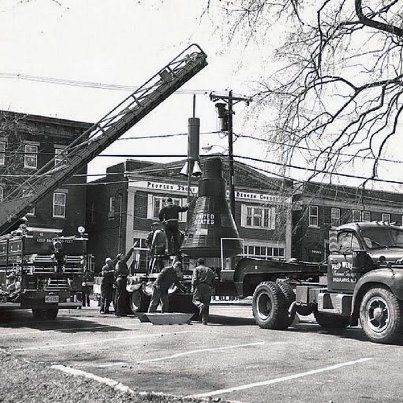 And, only today did I discover a video that chronicles that special day.

Lois Meyer via You Tube

As then, it today elicits an awe struck "wow".