Explorations of Maywood's offbeat, off the beaten path, overlooked & forgotten

Over 1.1K views of the content in this Blog.

The Symbol & Spirit of Maywood

Say Paramus you think of shopping centers and traffic congestion. Hackensack used to be thought of for its Main Street (until the Malls came). Many associate it with the County Seat, the Medical Center and the Academies, and perhaps soon with a trendy downtown.

How about Maywood? Look at the history books and most signs point to the coming of the railroad to town after the Civil War and the role that the train and its station has had in its history.

Perhaps it is captured in the welcome sign or the gazebo in the center of town?

Or does looking for a favorite “son (daughter)” help? The list of prominent folks from Maywood over the years includes Beverly Armstrong, a pitcher for Rockford Peaches of the All-American Girls Professional Baseball League ( A League of Their Own). There are a couple of jazz musicians (Regina Carter and Alvester Garnett), a model (Barbie Ferreira), a bunch of political figures, a couple of child actors (Danny Tamberelli and Alex Vincent) and even a pro football player who once played for the Giants (Justin Trattou).

So too was Len Rubin, co-publisher with his wife Lil of the Our Town weekly local newspaper. Obituaries for Len Rubin at the time of his passing in 1999 referred to him as Mr. Maywood. There was talk at the time about having a statue erected on Pleasant Avenue to remember him. That never happened, but there is a sandwich named after him at Maywood Inn’s Twin Doors Tavern, an open-faced corned beef on rye with Sauerkraut, Russian dressing and melted Swiss cheese - which was his favorite.

Some local businesses come to mind – some of today including Angelo’s, Maywood’s Marketplace as well as Maywood Inn’s Twin Door Tavern (The Maywood Pancake House has made an impression in a short time too).

How about you – what do you think? Who or what captures the best of the spirit of Maywood ? 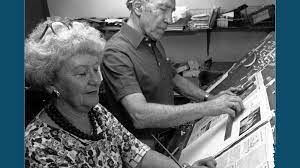