In a recent Journeys into Maywood feature, we discovered that there are some 25 different Maywoods around North America.

By contrast we are aware of only one other Hackensack – that being located in Minnesota.

In this Journey into Hackensack we visit Hackensack, Minnesota.

The present day Hackensack was named for an earlier post office there established in 1888, which derived its name our Hackensack here in New Jersey. The selection of Hackensack as the location name was credited to James Curo, the first postmaster, who was also a ranchman, and merchant there. It was incorporated as a village on June 5, 1903, and separated from the township on May 18, 1911; it had a station of the Minnesota and International Railway;

Like Hackensack, NJ, Hackensack, Minnesota is located beside a body of water. It is along the eastern shore of Birch Lake and maintains an asphalt boat ramp for lake access. Other nearby lakes in the area include Pleasant Lake and Ten Mile Lake, the second-deepest natural lake in the state.

A website for the local Chamber of Commerce easily contrasts Hackensack, Minnesota with Hackensack, New Jersey – even if not by name:

“There is no rush hour in Hackensack – no massive traffic jams where you sit and move only inches every five or ten mintues. No sirree – Hackensack is just what you need to reconnect with your family and experience the kind of vacation you only dream about”.

Hackensack is in the midst of of Minnesota's 10,000 lakes. It is said that there are 127 lakes in a 10-mile radius from Hackensack. Not surprisingly, the area is known for its lakeside cabin resorts – places such as the Pienwood Resorts, Quietwoods Resort, Hyde-A-Way Resorts, Nies Cabins and Campsite, Sievers Resort, Owl’s Nest Resort and the Happiness Resort.

The Paul Bunyan State Trail passes through the city along the east shore of Birch lake.

Hackensack is also acclaimed as the home of Lucette Diana Kensack, Paul Bunyan's girlfriend. In the 1940s, a sculpture depicting her was placed in City Park. A seventeen-foot-tall fiberglass sculpture of Lucette replaced the original in 1991

Noteworthy annual events include Sweetheart Days, which have been staged since 1952, and Chainsaw Days.

And there is the Rendez-vous Tap Room on First Street just across the street from the Lucette statue. They say there is no food beyond pretzels so you are advised to bring your own food but beer they have - up to 12 taps of beer, and always have at least two selections from the “Lighter” “Hoppier” “Darker” and “Something Different” categories.

Wondering if we could do an exchange between Rendez-vous’s brews and our local brew at the Hackensack Brewing Company ?

For more info on Hackensack, Minnesota – Here is the municipal website and a link to the area Chamber of Commerce. 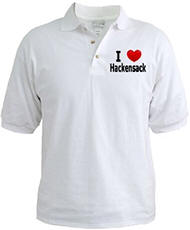 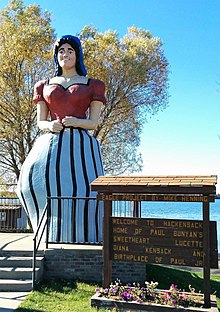 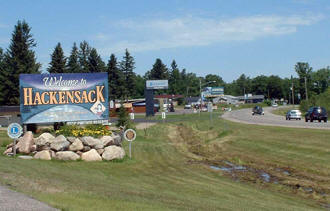