The Hotel Susquehanna on Main Street

Last week we posted a bit about the old Susquehanna Railroad that ran through town. With its station at Main Street and then later at River Street, it long had an important impact on life in downtown Hackensack.

For example, for a time the Hotel Susquehanna was a mainstay on Main Street.

We attach a picture of the Hotel and a promotional paper describing amenities there.

The history of the building transcends the Susquehanna Hotel. Called the "Bakman Building" it was built in 1890. Vernacular with Queen Anne style elements. The Bakman Building in 1896 was described as "on of the most prominent business houses in the town" (Hackensack Illustrated, p. 17).

Erected by Joseph Bakman in 1890, the building is a conservative design with its major design feature its massing. For many years, the building housed one of the city's noteworthy restaurants. This restaurant was started by Bakman. He was succeeded by Henry C. Renner. By 1896, Henry Struss was the proprietor of the Susquehanna Cafe, Oyster and Chop House (undoubtedly named by the railroad line to the immediate north).

Twentieth century occupants over the years have included a music school, a business school, a Chinese restaurant, and a variety of offices.

The building still stands – though given the changes occurring one wonders whether the pressure to tear down and building something new can be resisted. 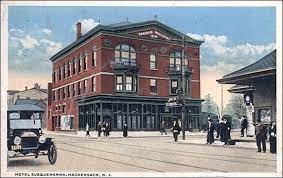