The Early Theaters of Hackensack

To folks of my generation Hackensack will always be associated with ha[[y memories for two movie palaces that used to call Main Street home – the Oritani and The Fox, the two located across the street from one another.

But a great history of Hackensack lets us know that from the turn of the 20th century there were a number of notable other theaters that served audiences from in town and beyond.

According to George Scudder’s, “Historic Facts About Hackensack”, before Hackensack became county seat in 1907, there were a few indoor places where crowds could gather for word or music – places such as Anderson Hall (at Main and Passaic), the Washington Institute (Main & Warren), the Opera House (forerunner of the Armory on State Street), and Irving Hall (Main & Mercer) Famous writers Horace Greely and Mark Twain are said to have visited, and so too governors as well as Presidents Grant, Wilson and Taft, who campaigned in these buildings which were also used for meetings of the town's fraternal organizations and civic, groups as well as for elections and debates.

As the century progressed and technology evolved (especially the invention of motion pictures in 1891), new places came on the scene.

The first motion picture theater of record in Hackensack was in 1907 at the Edisonia (55 Main Street). It is said that interest was especially high locally as early silent pictures were filmed at nearby Fort Lee on the Palisades.

Later, Other small moving picture theaters soon appeared, the Hudson on Hudson Street; the Rovale on Main and Bergen Streets; and the Bijou at about 170 Main Street, where we used to go for six cents. Another small theater was the Crown located on Anderson Street just east of the railroad.

According to this history, “the most outstanding theater that existed in Bergen County was the Lyric on the west side of Main Street just south of Mercer – offering Vaudeville in addition to the motion pictures (“Saturday evenings the lines were four abreast up main Street and then around the comer on Mercer Street”). Opening in 1913, it is said to have been “very modern, very elaborate and fancy”…Thick carpeting, ornate chandeliers and elaborately decorated ceilings. It thrived as long as Vaudeville did (until the 1930’s).

Growing up, one heard stories about the Eureka Theater on Banta Place. It was known for its balcony – common for vaudeville places but a novelty for a movie theater like this one.

It was the just a few years later that the Oritani (known for its “beautiful organ similar to those in large New York theaters). So popular was the Oritani in drawing folks from through Bergen Country that it prompted the building of the Fox not long after just across the street.

Hackensack’s prominent theatrical role started to be eclipsed by the opening of the Stanley Warner Theater on Route 4.

Today live performances are occurring at the Hackensack Performing Arts Center, a converted church on State Street, and movies in an upscale setting are offered at an AMC theater at The Shops at Riverside, technically in town at Hackensack Avenue and Route 4 but in fact reflecting another place and vibe.

More on the Theaters of Hackensack at: http://www.hackensacknow.com/HistoricFactsb.pdf 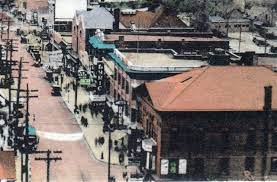