These days, as Hackensack embarks on its new chapter, there is much about how the city is connected to transportation by the Pascack Valley Line of N.J. Transit as well as buses that run through town and to the Hackensack Bus Transfer.

Not so much is written or spoken about the old Susquehanna line. There has been talk about restoring passenger service in the form of diesel trains running from Passaic or Sussex County ,depending on which vision you embrace to some point east of town (Again differing versions ranging from a connection to the Hudson-Bergen Light rail to the Meadowlands to some point along the Hudson River). For now the line is used for freight and a rare old time train excursion thanks to the Maywood Train Station Museum and others who remember and celebrate the line and days gone by.

Here is a picture of what it used to look like at the Hackensack station of the Susquehanna line at River and Mercer Streets – adjacent to the old site of The Record. This station opened in 1950 when it moved from its long time spot up a bit near Main Street. It stopped serving passengers in 1966 when the passenger trains ended. The sign stayed up for a number of years before disappearing; so did the steps from the street up to the platform, even after the passenger service was ended.

Restoration of passenger service remains on the wish lists of many.

We are told that when it happens the most recent proposal includes a fleet of newly built, FRA-compliant diesel multiple unit rail cars. The old Hackensack Station stop would be re-branded "Downtown–River Street".

Just when and if it will happen remains uncertain.

Here are links for more on the old Hackensack station https://en.wikipedia.org/.../Hackensack_station_, and on the proposal for restored service on the line. 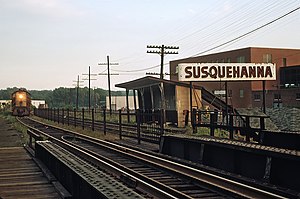