An Introduction to the Fairmount Neighborhood

Growing up in the area, I was most familiar with areas in Hackensack.

The first one was Main Street and the business section stretching from Sears to the Courthouse.

The other was Fairmount, the graceful and elegant neighborhood in proximity to the train station of that name just across the ways from Packard’s.

Never saw much written about Fairmount, but was always curious to know more (as well as other neighborhoods throughout town). So, it was wonderful to stumble upon the comprehensive and thorough remembrances and research by George Scudder about the Fairmount section of Hackensack focused on the period of around 1915.

Mr. Scudder, who has contributed a number of other histories related to Hackensack, was the founder and longtime mainstay of the Society of Fairmount Friends, a group that met twice each year to reminisce about the "good old days." At its peak the group had about 100 members. This history of Fairmount is an outgrowth of that work. The history of Fairmount is some 51 pages long. I highly recommend it.

As an incentive to look for yourself, here are just a couple of interesting background notes:

- Until 1890, this part of Hackensack as well as the southern portion of River Edge was known as "Cherry Hill". That the region known as Cherry Hill extended from about Howland Avenue in River Edge south to about Poplar Avenue in Hackensack

- For a few brief years before that, the area (and train station) was known as "Zingzam", named after Mr. G.N. Zingzam who owned much of that land. Zingzam was also architect of Fairmount Park in Philadelphia. Turns out that the northern end of the neighborhood was where many shrubs and trees were grown, and many of them were shipped by railroad to be planted in Philadelphia at Fairmount Park. The area thus in the late 1800’s became known as "Fairmount", a name preferable to Zingzam. His name as the neighborhood was not totally lost. He was honored in a park instead.

- Eventually, the name Cherry Hill was officially abandoned in the late 1890's, following the Cherry Hill tornado, and for other reasons.

- The streets running east and west as well as those running north and south were known by different names than the names we know them by today. Until about 1925, half of Fairmount was farmland.

There’s so much more – but fore that you’ll have to follow this link. http://www.hackensacknow.com/Fairmount2_1915b.pdf 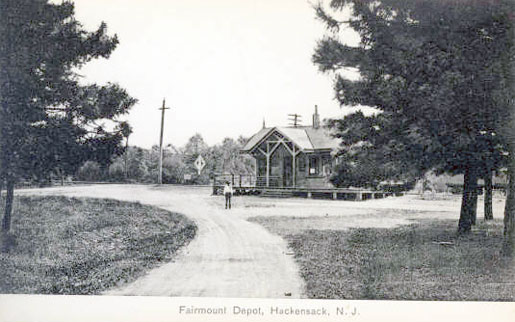