A Disappearing Name of Significance

Change is in the air around town.

Some of the changes are pretty apparent – such as how construction cranes are starting to be replaced by finished new buildings, many of them apartment buildings. There are also the visible results of the infrastructure and streetscape projects on Main and State Streets.

It has also been a time of loss - old businesses have passed – the most prominent is Sears – a fixture in its classic art deco structure at the corner of Main and Anderson. Another that many are still trying to get over was the closing of Kazmir’s Pet Shop in 2018 after some 68 years Anderson Street a few blocks away. Some of us are still hurting from the closing of the Louis Barber Shop – even as many years have passed since Louis Durante’s death in 2007 at the age of 96 (The shop endured for a number of years after Louis’ passing).

Others are more subtle, having garnered little attention. One that has caught my eye, however, has been the disappearance of the once very visual and present name of Oritani around town.

It’s a name that at one time captured the essence and pulse of the community.

The name itself came from a local Native American chief Oratam (or Oritani/Oratamin) of the Hackensack Indians who lived in northeastern New Jersey during the period of early European colonization in the 17th century. Prior to being settled by the Dutch in 1693, Hackensack was home to the thriving Lenni Lenape Indian community that lived and prospered along the banks of the Hackensack River.

Bergen County was inhabited by the Achkinheshcky tribe, from which “Hackensack” was eventually derived. Hackensack means “mouth of a river.” The “Hackensacks” formed villages, each one practicing and serving as its own government. Interestingly enough, these villages practiced a democracy, where all members of the tribe were involved in the decision-making.

Once the Dutch arrived in Bergen County, they began to build the area into a permanent settlement they named Bergen. Through their dealings with the Chief of Hackensack, Oratam, the Dutch were able to live harmoniously with the Indians. By the mid-1600’s, the British began to arrive in the Hackensack area. From then until the Revolutionary War’s end in 1783, Hackensack was an area of unrest.

Documentation shows that Oritani lived an unusually long life (almost 90 years) and was quite influential among indigenous and immigrant populations. In particular, Oritani managed to earn the respect and admiration of both Native and European communities, helping to broker all too short yet substantial while they lasted land deals, truces and treaties between the native and colonizing peoples. In fact, so highly regarded was he as a sage negotiator on behalf of tribes that eventually that Peter Stuyvesant, Director-General of New Netherland, enlisted his support as well. For Stuyvesant, Oritani would travel the territory and organize a "conference" leading to a treaty which temporarily ended the hostilities. Oritani also played a prominent role in the negotiations for the sale of land to Robert Treat at what would grow to become Greater Newark in 1666.

So important was his role that some three centuries later his name was still prominently connected to major institutions in town during Hackensack’s last golden era during the mid-20th century.

It was not long ago that the Oritani Theater was a fixture on Main Street – just across from the Fox Theater and the Oritani Savings Bank. At one time it was major destination It opened in 1926, directly across the street from the Fox Theatre. Both were longtime major destinations. One picture included in this posting is of an appearance by Jerry Lewis. It remained on Main Street until 1983, when it closed not long after having been divided into a multiplex cinema.

Just around the corner was the Oritani Field Club, another local landmark. It was housed in a two-story Colonial Revival building that lasted for some 130 years after the club was founded in 1887. At its height it was a hub of recreation, but I was an important meeting place for the movers and shakers of Hackensack. There were eight tennis courts, for amateur and pro use. There was an Olympic size pool, and the place also sported spots to play cards or just socialize. Today it is the site of a new apartment complex.

And, as a kid the local accommodations for out of towners coming to the area was the then modern Oritani Motor Hotel, on Hackensack Avenue just north of Route 4 and across the golf driving range. Bloomingdales (Riverside Square and Two Guys (Home Depot/Staples) would only come later. The motel was situated next door to the Maplecrest Beach (and across from the golf driving range).

The Oritani Motel underwent a number of renovations and restorations – at one time it was a Best Western. It also sported a Japanese restaurant that gained popularity. In the end, changes tastes and real estate values caused it to be demolished replaced by a residential complex there known as Avalon Hackensack at Riverside.

Finally, It was also only in the last couple of years that the Oritani Bank, which started business in Hackensack in 1911, was bought out. For a long time its headquarters was at the corner of Main and Berry Streets. In 2005 it would move out of the city to Washington Township. Many locations would close before and after its 2019 merger. Those that remain are now sporting signs saying that it is part of the Valley bank.

If one does a Google search of the name Oritani one will find a listing for an Oritani Cleaners & Tailors at 143 Passaic Street – just past the train tracks. The site is, in fact, still a cleaners, but its sign makes no reference to Oritani. It is known today as Hackensack Green Cleaners.

But the name has not been totally lost. A representation of Chief Oratam of the Achkinhenhcky appears on the Hackensack municipal seal.

In addition, a 2000 era mid-rise apartment building at 241 Union Street (corner of Central Avenue) is described in a Zillow real estate listing as Oritani Towers – though the name itself does not appear at the entrance to the building. There is only a street number.

It’s a far cry from the days when one could bank at the Oritani Bank, lunch or play tennis at the at Oritani Club before taking in a movie at the Oritani Theater. A name, once omni-present on Hackensack’s streets, today lingers for some of us mostly as a memory. 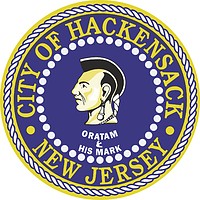