A Journey into Cambridge

A Sense of place can be derived by its history, its popular culture, its geography, flora or architecture - even its foods.

But most important, at least on my list, is the role of its people. After all, it is the people who build a community and help mold it & define it through their works and their feelings.

Like most any community, a look at Cambridge highlights includes its notable citizens. The local list found at Wikipedia includes many athletes, such as hockey players Jim Schonfeld, Kirk Maltby, the first Canadian player on the Toronto Blue Jays (Rob Ducey), a golfer (Ian Leggat), some gymnasts (Yvonne Touesk and Victoria Moors),  a professional wrestling tag-team (Derek Graham-Couch and Russell Murray known as The Highlanders). It also includes a singer in the group the Birthday Massacre (Chibi) , and a poultry industry pioneer (Donald Shaver).

Two names are meaningful to me. The first is Peter Gzowski, the late acclaimed writer, newspaper and magazine editor, CBC Radio host who passed away in 2002 (Where has all the time gone?).

The other is a personal favourite of mine - Ken "Jiggs McDonald, sportscaster who has done play-by-play announcing for NHL games for more than 40 years. In 1990, McDonald received the Foster Hewitt Memorial Award from the Hockey Hall of Fame. Jiggs was born in Galt and is an esteemed member of the Cambridge Sports Hall of Fame.

Above is but a partial list of some folks of note. It is by no means complete. Who might you add ?

While we acknowledge these people who have left their mark, we prefer to think that we each bring something unique to the table - be it Cambridge or anywhere else. After all, its the people - all of us - who build a community and help mold it & define it  through it through our works and feelings. 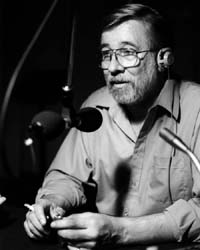