7 Most Romantic Artworks of All Time

Displayed at the Musée du Louvre in the city of love, Paris, this masterpiece is the most celebrated classical myth.

Created by Antonio Canova, this marble sculpture illustrates the story of Cupid and Psyche wherein the mythological lovers are at a moment of great emotion.

According to the story, Cupid’s mother, Venus instructed Psyche to bring back a flask from the Underworld, forbidding her to open it. Her curiosity could not help her from opening the flask. As soon as breathed the fumes, she fell into a death-like sleep. Seeing her lying motionless, Cupid ran to her rescue.

The sculpture depicts the moment after Cupid awakened Psyche with a kiss. Cupid is seen holding her beloved Psyche in a tender embrace with his face close to her while Psyche lets herself sink into his arms.

The concept of love is always a popular subject and has attracted artists throughout history who have depicted this amorous concept in different styles using a myriad of mediums.

With Valentine’s day round the corner, let’s explore the sweetest representations of romance through these top seven art picks full of love:

This 13th-century stone carving depicts a bejeweled couple gazing rapturously into each other’s eyes. In addition to being a depiction of love, the statue is also believed to symbolize the desire of humans to connect with the divine power.

This is an awe-inspiring oil painting by Austrian Symbolist painter Gustav Klimt in the early 1900s. Presently, its on display at the Österreichische Galerie Belvedere museum housed in the Belvedere palace in Vienna, Austria.

Influenced by contemporary Art Nouveau style, the painting depicts a loving couple entwined in an embrace. Draped in colorful robes, they kneel in a grassy patch of wildflowers wherein the man gently cradles her face and leans to kiss his partner passionately. The woman seems to accept her lover’s kiss by wrapping her arms around him with her eyes closed, emphasizing the intimacy of the scene.

Creation of Rembrandt, it is a portrait of a couple as Isaac and Rebecca.

Rebecca is in a luxurious red dress decked up in jewelry while her companion Isaac is seen next to her with his hand on her bosom. Fingers of her left hand are seen gently resting on his hand in a protective gesture.

Despite the intimacy of their gesture, they do not look at each other but are feeling the warmth alone at this moment beside an arch.

There are many romantic paintings created by artists in history but this is indeed an inspiration to patience, humility, and love.

This is a captivating 1892 artwork by the post-impressionistic painter, Henri de Toulouse-Lautrec.

This painting features two women in a powerful embrace, kissing passionately. Holding each other closely, it seems they don’t want to be separated from one another thereby embodying intense romance.

The painting has an excellent color scheme with bright reds and yellows balanced with the use of cooler shades of green, blue, and gray.

Indeed, this artwork is an epitome of sensual delight.

El Beso (The Kiss) is an enormous sculpture of a couple engaged in a deep, passionate kiss.

It is placed in Parque del Amor (Love Park) in Lima’s Miraflores district and was inaugurated on Valentine’s Day in 1993.

The man and woman depicted in the statue are said to be Peruvian sculptor Victor Delfín, and his wife. Undoubtedly, the statue brings new meaning to the term ‘public display of affection’ and is a popular spot for couples who are often found indulging in a little cuddle and kiss.

6. The Fisherman And The Syren

This sensuous work of art is the creation of Frederic Leighton.

Inspired by a poem by Goethe, this painting illustrates the story of a mermaid who rises from the waters to complain to the fisherman about his attempt to entice her children to death.

This beautiful painting showcases the seductive and destructive power of female sexuality form in an astounding manner.

The Fisherman And The Syren

7. Kiss By The Hotel De Ville

This famous photograph depicting love is captured by French photographer Robert Doisneau in 1950.

This image captures a sensual moment of two lovers on the streets of Paris. Sharing a deep passionate kiss, they are lost in their dreamy world ignoring the bustling pedestrians. 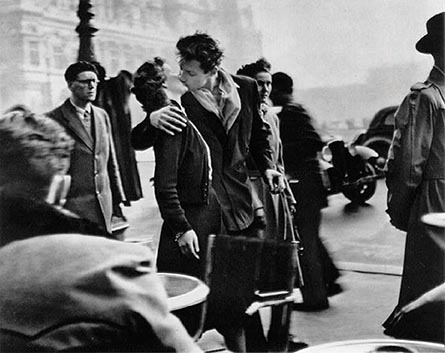 These masterpieces demonstrate the limitless forms that love can take and prove that art and love make the perfect match.

Hopefully, it will help you find some inspiration to add the aura of romance in your home.