News, views and reviews for the Audiophile and Music Lover to help you make smart product purchase decisions. Learn about curated solutions that work!

Over 12K views of the content in this Blog.

Don Morrisons' company is one of the 'oldest' speaker manufacturers in Canada - he talks about the merits of omni speakers.

The whole premise of a high end speaker system is to reproduce the recording as accurately as possible. The average audiophile, while he is keen to pursue the ultimate in ﬁdelity is constantly upgrading. The problem is that if heʼs using a conventional front ﬁring speaker heʼs doomed. It is a ﬂawed design which will never be able to remotely approach the ability to sound like a live performance in the listening room even when using an accurate recording.

Enter... The Elephant in the Room... virtually all conventional loudspeaker systems have a major ﬂaw which either no one notices or perhaps no one wants to mention. The ﬂaw is this: They all sound like electro mechanical devices. More to the point, they sound for all the world like public address systems. Some will play louder than others. Some will have a bit more detail than others. Some will extend a bit lower in frequency response. They all sound like PA systems.

The only loudspeaker design which does not have this ﬂaw is one which exhibits an omnidirectional signal launch pattern from a single point in a solid hemispherical pattern. The Morrison Model 29 is the closest you can get to this ideal approach. Letʼs delve into this description further.

The marketing departments of speaker companies will jump onto any bandwagon and make ridiculous claims. There have been more than a few designs claiming “omnidirectional” with woofers and tweeters parked on four sides of a box. The ads proclaim breakthroughs in design ... but having drive units parked on each of the 4 sides is nothing but confusion to the ear. The signal is launched North/South/East/ West. What if youʼre listening from the South - West corner? This design might sound a bit more spacious and will certainly play louder but the diffraction and time smear is simply multiplied by four.

Other attempts at “omni” include a conventional front ﬁring woofer with a tweeter parked on top ﬁring up to the ceiling. You still have dissimilar dispersion patterns. Bi-polar designs have a front/rear signal launch which still ends up with a beaming response as the frequencies go up. The same applies to a di-pole. The dispersion patterns arenʼt the same at all frequencies and even if they were it suffers from the dreaded PA syndrome of narrow window of signal launch.

The proof of the pudding is quite simple. Get yourself to a live UN-AMPLIFIED performance of a string quartet. Park yourself ﬁrst smack dab in the middle. Then swap seats with someone ten feet left of mid position. Provided you havenʼt been thrown out of the concert at this point, swap seats over to ten feet right. The only thing that really changes is the PERSPECTIVE. Moving left the ﬁrst violin is a wee bit closer but the cello doesn't change other than being a wee bit further away. Moving right the cello is closer but the ﬁrst violin doesn't disappear.

If we have a recording of this live event and play it back through a conventional speaker system, we suffer the angst that comes with positioning the speakers to achieve a “sweet spot”. After a bit of bobbing and weaving we may get to enjoy the music. ... but if we move left from mid couch we notice the ﬁrst ﬁddle is much louder, the cello has moved and the second violin and viola are sort of weaving in and out.  Moving right we have the cello parked in our laps but the ﬁrst ﬁddle is missing in action. This does not happen in real life.

Now we repeat the playback using a true point source omni-directional speaker system with a full hemispherical radiation pattern. Moving left and right of mid seat we have a wonderful experience of correct perspective just as we had at the live concert. As an added bonus to this design we have a similar signal ﬁring at 90 degrees. Why is this a bonus? Audiophiles spend thousands of dollars to “tame” the room acoustics. Why? Because the conventional front ﬁring speaker has a dissimilar frequency response from directly in front to say 90 degrees to the side. The sound bouncing off the side wall is totally different from that in front. The result? The ear/brain gets confused and the only cure is to kill any sounds from the side while only allowing sound from the front. Not very natural. In fact it becomes rather claustrophobic and very fatiguing.

Since the average audiophile listens to artiﬁcial mixes of recordings and never attends un-ampliﬁed concerts he is not even aware of speaker systems capable of reproducing a good facsimile of a live event. When listening to the Morrison Model 29 for the ﬁrst time the audiophile is sometimes confused. They donʼt sound like what he is accustomed to. They donʼt sound like a PA system. 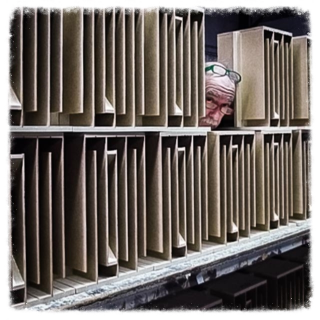 Don at his Speaker Workshop