How to Integrate Video Calling and Chat API with WebRTC?

WebRTC allows developers to implement simple real-time communication within applications. Developers can build video messaging apps and video calling systems integrated into a web page or connect them with chat APIs rather than having to develop an entire application from starch. A web-based video call application can be engineered rapidly with HTML and JavaScript, wherein no back-end codes are required.

Basically, this means WebRTC supplies real-time communication capabilities and interacts with the other components of the application. It gives the ability to host video chat apps online, allows video call settings such as paired video conferencing, scheduling, etc. This integration provides users with a powerful platform for providing and receiving services and gives them an added value over using a third-party video conferencing tool.

Still have doubts? Let’s understand from the beginning, so what exactly is WebRTC?

WebRTC stands for Web Real-Time Communication. It is a technology that allows web applications and websites to capture and stream audio or video as well as to exchange arbitrary data between browsers without requiring an intermediary.

WebRTC is a free and open-source project that enables web browsers and mobile devices to communicate with each other. It offers users the ability to communicate from within their primary web browser without the need for complicated plug-ins or additional hardware.

The WebRTC was announced by Google in May 2011 as a means of developing a shared set of protocols for enabling high-quality RTC applications within browsers, mobile platforms and IoT devices. During those times, Flash and plug-ins were widely used and were the only methods of offering real-time communication. Nonetheless, after a considerable amount of work was put in, the first cross-browser video call was established between Chrome and Firefox. Since then, support for WebRTC in the developer community has risen steeply as more and more organizations add their support for the specification. Currently, WebRTC is available within Chrome, Firefox, Safari, Edge, Android,, and iOS and is a widely popular tool for video calling.

Video calling is possible when two or more devices are connected using the WebRTC protocol. There are mainly two modes of connection

Peer-to-peer communication for WebRTC enables the exchange of video and audio content between browsers. Unfortunately, the purely direct exchange may not always be possible, as a browser may be located behind a symmetric Network Address Translator (NAT). NATs force WebRTC applications to use TURN servers located on the public Internet for forwarding media data between browsers. This type of architecture is simple to implement and has low application operating costs, because lesser backend infrastructure is required. 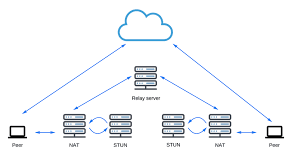 Relying on peer-to-peer connections for browser video chat is not advisable while developing production apps. Normally, apps built on such ICE frameworks do not connect as users have advanced LAN security. Relatively, developers set their RTC Configuration to first attempt peer-to-peer, and then fall back to relayed connection if peer-to-peer fails. In such cases, developers do not need to decode/recode streams, they could just follow the below procedure, which is to –

· Use the Broadcaster to connect to the server (peer to peer)

· Allow the clients to connect to the server (peer to peer)

· Enable the server to relay the stream from the broadcaster to the clients.

Implementing multi-user video chat api with WebRTC is similar to a peer-to-peer audio/video connection. WebRTC is an asynchronous peer-to-peer architecture, and it only needs a centralized server for exchanging the connection set up information. While building a multi-user video chat – developers need to implement 1-to-1 videos using WebRTC and a simple Node.js server to relay messages over Websockets, which will support an arbitrary number of participants. The only core functionality required here is that client needs to have JavaScript, which handles establishing and managing the connections to all the other participants. When the page is loaded, generate a random identifier and capture a user-entered display name.

WebRTC needs signaling to set up peer-to-peer communication between two nodes. This means ultimately, if a client joins a room that has already been created by another client, the media exchange between peers will begin and will be managed by the following socket event callbacks or functions.

Do Not Build a WebRTC Signalling Server

WebRTC is a fascinating technology that goes beyond the common computer connection protocols and offers excellent communication pathways between a client and a server. However, building WebRTC signaling servers that function aptly is extensive and expensive. However, it can be full-fledged with the right service provider – someone like MirrorFly. MirrorFly offers Signalling WebSockets to developers so that they can set up call connections between the client servers. The client connection must adapt to each other by sending messages, data, and media over the public IP address of both the client’s WebRTC signaling servers. Moreover, with an open-source WebRTC library offered by MirrorFly developers can swiftly build and competently integrate video calling and chat APIs with WebRTC. So, it’s best not to waste time and money in building a WebRTC signaling server.