Do I need Orthotics?

How's Your Gait is the official eMagazine of Burlington Orthotic Centre. We have passion for what we do so you can continue to live a healthy active life!

Over 14K views of the content in this Blog.

Is your Child Developing Osgoode-Schlatters Disease, a Bump in the Knee?

Is your child an athlete? Does your child complains of knee aches after practice? Are you ignoring thinking it will be okay after sometime?

Sometimes as parents of an athletic child you get hit with so many aches and pains and you begin to wonder which ones are serious and which ones aren’t. Do you have a young athlete in your life? Have they ever complained of knee pain after competition or practice? They may have developed a common condition called Osgoode-Schlatters Disease, which even though it sounds scary is not really a disease at all. It is basically a function of the muscles and tendons not developing at the same speed. It is typically seen in pre-teen and teenage athletes who are involved in running and jumping sports and manifests itself as a lump or bump or bony outgrowth at the front of the knee. If you are teenage child is regularly complaining of the pain in the knee after completion of his athlete practice, chances are likely that he has developed Osgoode-Schlatters Disease, it is not a scary disease as it sounds. It is a condition where the tendons & muscless are not developing together. 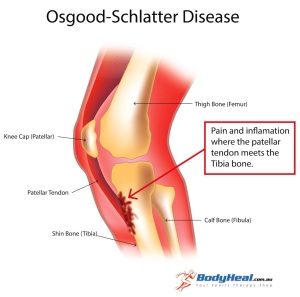 How Does it Develop?

Osgoode-Schlatters develops when the quadriceps muscle group pulls excessively at its attachment on the tibia. This happens easily in young people because their bones are growing at such a fast pace. The patellar tendon attaches into the tibial tuberosity, which has yet to fuse to the rest of the tibia. As the quads contract they pull the tuberosity away at the growth plate causing a lot of pain.

Watch out this Video

What can you do about it?

The good news is Osgoode-Schlatters will not last forever! It can occur on an off throughout puberty but typically lasts 12-24 months. If your child has been diagnosed with Osgoode- Schlatters your best approach is physiotherapy, taping or bracing, cushioned custom orthotics and supportive sports specific footwear.

Do not worry & take care of the child :)

Two Locations to serve you