Follow Us, as we share the best in Car Pool Karaoke as inspired and perfected by James Corden. Enjoy!

Over 9.1K views of the content in this Publication.

The Viral Video of the Year: Carpool Karoke with James Corden & Adele

Adeles Carpool Karoke with James Corden is the year's top viral video (146 Million Views) on Youtube. This is going to make your day Charming!!

The video of Adele rapping to Nicki Minaj's verse on the Kanye West track "Monster", from the "Carpool Karaoke" segment on "The Late Late Show with James Corden," was YouTube's top trending video of the year 2016.

The Adele's segment broke all the records of YouTube to become the most watched clip, having about 145 Million Views till date!! Wow, isn't it?? Do not miss out to watch it out; it will be the most charming video of the day!!

Adele and James Corden started the show with singing Adele's new smash hit "Hello"; and Adele complimented James Corden take on her song and Corden cheered all the time during the show.

Corden then asked if Adele was worried that she would have trouble writing hit songs now that she was writing from a happier place. “I want my fans to come on, like, a journey with me,” Adele said. “One of the reasons I named my albums after my age, as well, is they’re sort of just Polaroids, almost, of my life at that time.” 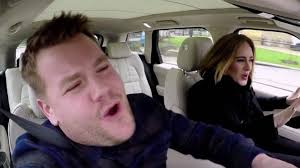